Athlete of the Month: Jim Noyce

CrossFit Birthday and how did you hear about CrossFit? I don’t recall the exact date, but sometime late in 2009. Bobby started doing it, and he knew it fit him.  He got Jaime and Shelley started, and they worked on me.  I have always been someone that worked out, and believed in cross training.  Although, for me, it was running and biking when it was nice outside.  Lifting weights (on universal or nautilus machines, not free weights) and swimming when it wasn’t.  In other words, it was a Season at a time; unlike Crossfit, where you do it all within the same workout. Anyway, they finally shamed me into giving it a try; and of course in the first workout, I had to prove myself.  The workout included air squats, and squatting was not something any coach had ever had me do.  Afterward, I couldn’t walk normal for several days, and I had to go downstairs backwards for 2 days.  But, I was hooked.

How has CrossFit changed your life? I would have to point to the people I have met, 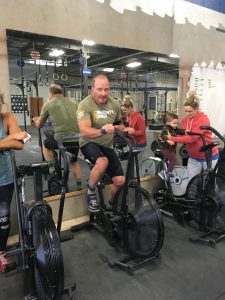 and the friends made.  It is inspiring to be in the gym everyday with so many wonderful people that share similar goals and beliefs when it comes to health and fitness.  Even deeper than that, I don’t know if Jaime would have met Lance if not for CF515; I don’t know if Bobby would have met Kady if not for CF515.  So the impacts on our family have been meaningful and wonderful.

As far as physically, I had both hips replaced in early 2015.  Too many miles of running caught up with me.  My recovery from those surgeries was much more rapid than the surgeon expected; and I credit Crossfit with having me in good shape going into those surgeries, and accelerating the recovery.  The benefits of physical conditioning, and especially weight bearing workouts, become even more important as we age.

Favorite & least favorite movement:  My favorite CF movement is running.  Unfortunately, it’s something my surgeon discouraged on artificial hips, so I now run sparingly.  I used to actually be pretty good at it.  I have sub-2 minute half miles and a sub 40 minute 10k in my past.  So, currently it’s kipping pull-ups, just because it’s fun to tell my 60+ year old friends I can string together a bunch of pull-ups.

Least favorite is double unders.  It’s like I just ran a wind sprint when I do 10 of them; and people that are efficient don’t even breathe hard when they do 50.  It pisses me off. 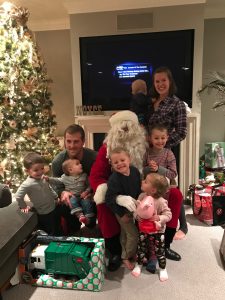 Family info: Shelley and I have been married 40 years.  We’re blessed that all of our children, spouses and 6 grandkids all live here.

Favorite saying: Anyone who has never made a mistake has never tried anything new.  Albert Einstein

Favorite songs to workout to: Bobby doesn’t play any REO Speedwagon or Styx, so I can’t.

Favorite TV show or movie: The Great Escape.  Interestingly, they recently uncovered the tunnels on which the movie is based.  Steve McQueen and James Garner play American POWs, and have key rolls in the movie.  Historically, there were actually no Americans involved.  But, I still love the movie.

What movement or skill were you most excited about when you were able to do it? Stringing together kipping pull-ups was awesome.  The first time I clean and jerked 135 pounds was also pretty cool, and a few months ago I got under 6 minutes in Grace for the first time.

Something interesting about me: Something interesting – I’m 63.  I’ve been working out most of my life, and doing Crossfit for almost 10 years.  Yet in 2018, I had PRs in strict press, back squat, front squat, deadlift, clean, jerk, CFT, and a personal best in Grace and Cindy.  Now, I understand that had Crossfit existed and I started it 40 years ago, that would not be the case, because my numbers aren’t that impressive; but it is still a shitload of fun to go to the gym thinking you might set a new PR on any given day.

I also suspect I am the only person in the World that has a spouse, 3 children and a daughter-in-law that have competed at the CF games.

3 Responses to February 2019 Athlete of the Month: Jim Noyce