Athlete of the Month: Jake Pfeffer 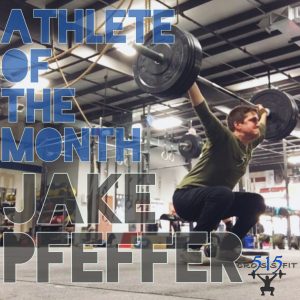 How did you hear about CrossFit? In August of 2012, Kacey and I signed up for a 10 week extreme body shaping kickboxing class. It was at that time when Kacey’s boss began to consistently and repeatedly ask us how our workouts were and if we were ready to take our fitness to another level. Fast forward to November 2014. The kickboxing thing had faded, moving to Grimes and getting married was all behind us. We had run out of giving him excuses as to why we weren’t going to try it.

How has CrossFit changed your life? I would say that I have become more comfortable in my own skin which in turn has gotten me into conversations I may not have previously gotten into. Which ultimately means Kacey and I can’t ever ride to the gym together because I have to talk to people and she has to get in and get out! 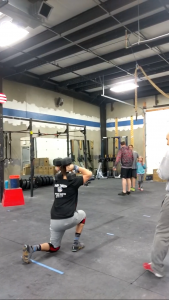 Family info Married to my wife Kacey and we have two English bulldogs. One is 6 years old named Nola and the other a 3 month old name Ali. They couldn’t be any more opposite from each other. Ali and Nola that is.

Something interesting about me I first started snow skiing when I was three years old. Every couple of years my brother and I go to Colorado and make a week out of it. It’s one of my favorite things to do. I have 20-25 pairs of Michael Jordan’s retro shoes that I have never once attempted to try on. They sit in their original boxes in our closet. While I don’t collect those shoes anymore, I still have a fairly serious addiction shoes. It’s not good!

Favorite songs to work out to Like everyone else, once the workout gets started I focus in on the reps I need to complete and tune out the music. However, it’s usually some good old rap music that will get me ready to go!

Favorite TV show or movie My favorite movie is Good Will Hunting. That said, I don’t watch much TV and my wife has found that if she wants the laundry or something done, she’ll just put on a movie because I struggle mightily to sit there and watch something.

What movement or skill were you most excited about when you were able to do it? It will be the ring muscle up!