Athlete of the Month: V 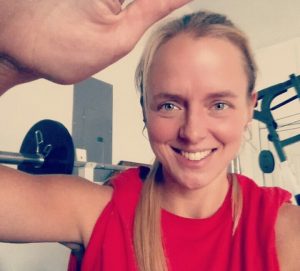 How did you hear about CrossFit? I drive by almost every day before and after work. It took me a really long time to get up the courage to come in though.

How has CrossFit changed your life? In every way! CrossFit has changed my appearance, strength, self-esteem, habits, and the way I look at things. Not to mention the amazing people that I have been fortunate enough to meet and know or are a part of my life now.

CrossFit has changed me physically because I can see it in my body and my appearance. I had always tried to do cardio and I lost a ton of weight that way, but I couldn’t seem to get anywhere near my end goal. And I didn’t like what I was doing – I just made myself do it. I started eating better which helped as well. But CrossFit is what helped me build muscle and what helped me finally achieve my weight loss goals. The last time I checked in at Max Muscle my totals were 115 pounds of fat loss and 15 pounds of muscle gain over the last two years. Those are some serious numbers – but the mental and emotional changes CrossFit has made in my life are far cooler. I’ve stopped stepping on the scale – I don’t care what I weigh anymore!!! I’ve learned that those numbers don’t matter so much compared to how I feel. I’m gaining strength. I’m gaining confidence. I’ve found something that I look forward to every single day and thoroughly enjoy (no matter how much I complain). I’ve learned that age, size, and circumstances do not even begin to define our abilities. And though it’s still a major work in progress, I’m learning to be proud of what I am able to do instead of beating myself up for what I can’t. CrossFit 515 has been nothing short of amazing for me! 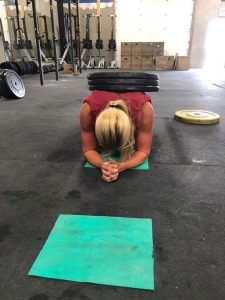 Family info We have a little girl named Bronwyn who is almost 9 and a little boy named Roman who just turned 6. We also have 2 cats, Scotch and El Dudo. Haven’t caved yet, but I imagine a puppy will be coming sooner or later as well. 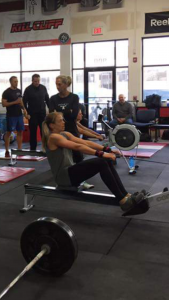 Something interesting about me I worked at a country club when I was younger and did the ice sculptures for special parties. Yup, they actually trusted me with a chainsaw lol. It was a lot of fun!

Favorite songs to work out to Cinderella Man, Thunder, Heathens, or really anything with a good beat… Surprisingly though the music tends to fade into the background once the workout has started. I just wish there was an “in case of emergency” button you could hit mid-workout when you feel like you’re fading or need something to amp you up a bit and the song would instantly change to one of those.

Favorite TV show or movie Maybe I should have said something interesting about me is that I don’t watch TV. The Ref, The Usual Suspects, Snatch, and American Sniper would top out my movie list and then pretty much any and all comedies.

What movement or skill were you most excited about when you were able to do it? It really felt great the first time I did a snatch and the weight felt like it just flew up – I knew I had done it right – but that doesn’t happen consistently yet. I was also thrilled when double unders started to click. But I was hands down the most excited when I got my first strict pull-up.

2 Responses to Athlete of the Month: V