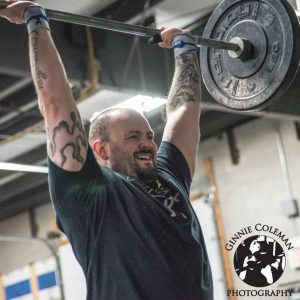 How did you hear about CrossFit? Oddly enough, I first heard about it from the “Crossfit Fails” videos that were running rampant all over Facebook and YouTube. I watched one, and it was really funny, but then right after it an actual CrossFit video played and that planted the seed of interest. Shortly thereafter, my brother informed me that he was going to 515 and that I should try the two weeks free. I came in the first day and we did Tabata Something Else, all body weight movements. It destroyed me and I loved it.

How has CrossFit changed your life? It has kept me young, being in my 40’s I have aches and pains, but overall I feel younger now than I did living the unhealthy life I did in my 20’s and early 30’s. That allows me to keep up with my daughter that goes 100 mph at everything she does. It has also changed my outlook for being a father, having learned a ton about health and fitness has given me very clear goals on how I’d like to raise my daughter with a fit and active lifestyle.

It has also given me a sense of camaraderie and gratitude being a part of the community that Bobby and Jaime have curated within 515, opening a gym is easy, but having a great community of motivated, positive people is a direct reflection of the leadership they exhibit. 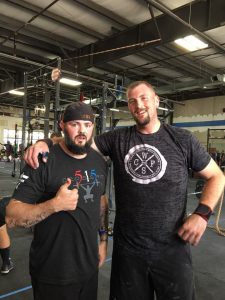 Family info My wife Mindy and I have been married a week short of 10 years at the time I am writing this. We have a 2 year old daughter, Lola, that is awesome and challenging and I wouldn’t have her be any other way. My younger brother, Jeremy,  has been in and out as a member of 515 a few times over the past several years.

Favorite songs to work out to If I had my choice it would either be metal or gangster rap. Big surprise I’m not allowed to pick the music. As it stands now for heavy lifts I like the few Eminem, Korn or Metallica songs that make there way through the rotation. During our metcons it doesn’t really matter since I rarely notice the music.

What movement or skill were you most excited about when you were able to do it? Toes-to-bar because it was the first movement were I worked and worked and  worked and then finally it just clicked.