I heard about Crossfit from a friend of mine my freshman year at Drake. We were at 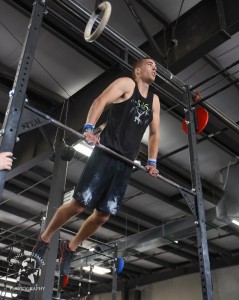 Jethro’s eating wings and he was telling me about these crazy strong guys that did some insane workouts. So that night I went back to my room and looked up some videos on Youtube and thought it was awesome! After that I tried adding some of the lifts and workouts into my own routine thinking that if I did that then I might look like those guys some day… obviously it doesn’t work like that and still hasn’t happened, but I’m getting there 🙂

Changed my life: Crossfit is a great way to workout and actually have fun while doing it. Over the past few years I have actually learned how to lift properly, which has resulted in a lot of improvement. Crossfit is a mental challenge most days and because of it I have learned that I can push myself physically and mentally farther than I thought I could. Finally I met a lot of great people over the past few years and am very thankful for everyone I get to workout and hangout with!

Favorite movement: The snatch of course. As with most lifts and movements form plays a huge part, and this is especially true with the snatch. Taking the time to develop good technique and muscle memory with good form makes a huge difference. Then, like in my case, even if you’re not a big and strong like some people you can still put up some heavy weights 🙂

Least favorite movement: Either thrusters or deadlifts. No matter how many you do or how heavy/light the weight is, they just plain suck.

Family info: I am currently on rotations in my last year of pharmacy school at Drake, so this upcoming summer I will become a licensed drug dealer 😉 I’m originally from Grinnell where my parents still live. My dad works for Monsanto and farms, and my mom works for an insurance agency. My sister and her husband currently live in Altoona, she is a nurse for a nursing home back in Grinnell and he is a computer coders for some company in Clive that I always forget the name of.

Something interesting about me: I hate this question because I never know what to say. Something most people probably don’t know about me is that I was one of the chubby kids growing up, and stayed that way until about the summer going into my senior year of high school. I don’t have many pictures because…well, I was fat and fat kids don’t like their picture taken haha, but just take my face and make it a perfect circle and you will get a pretty good idea. Other than that I’m pretty boring, I like cars (especially corvettes) motorcycles, pizza, and ice cream. So if you want to talk about or go grab any of those things I’m down!

Favorite saying: Slow is smooth, smooth is fast! – Chad Vaughn. Some of you might recognize this saying from the cover of the Superhero Training Manual in the gym. 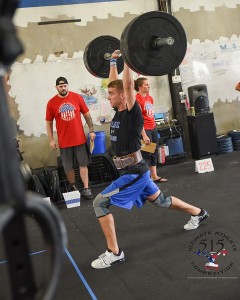 Favorite song to workout to: Lose Yourself – Eminem. If I need to get pumped to go for a heavy lift this is definitely the go to.

Favorite movie: Captain America, I mean come on, who doesn’t want to be a superhero! I also just saw the movie Creed, which was awesome and I recommend it. I’m now considering giving up Crossfit and moving to Philly to become a boxer 😉 The new Star Wars movie was pretty legit also!

I’m one of the rare people that was able to do a muscle up since the first night I came to the gym, I attribute it to the great demonstration from thee Bobby Noyce! But strangely I struggled a lot with figuring out how to do butterfly pull-ups. Bobby probably tried showing me and working with me for over a year before I finally figured it out. I still remember the night I somehow started doing them on the pull-up bar in the garage door, it was awesome!