How did you hear about CrossFit? – Before starting I actually knew very little about CrossFit. We live in Grimes so I drove by the gym every day. I had checked out the 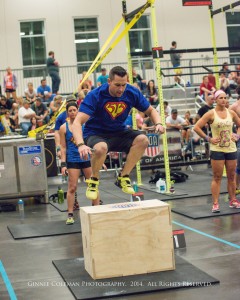 website a couple times because I was looking for any kind of gym closer to our new house in Grimes. Someone at work told me that Stephanie Roberts, who I work with, had been doing crossfit. I talked to her a little about it and finally convinced myself to stop in over lunch and talk to Jaime. (That process took a whole year)

How has CrossFit changed your life? – I know people all the time say how CrossFit has changed their lives. Might as well be the slogan at the 2016 games or the 13th step in AA. I wish I could say it replaced my addiction to heroin or got me off the streets. Despite what you read on Instagram, that is actually not true. Those seem much more legitimate as “life changing” though. What it has done for me is changed my outlook on fitness and why I exercise. Since college, I have been fairly health conscious. Since I was 17, I have spent hours of my week at the gym. I have always struggled with my weight and body image. On multiple occasions I have lost 40+ pounds, only to end up right where I started, usually because of injury. For the first time I actually feel like I’m doing something that makes me healthier and better than I was the day before. Maybe it’s the accountant in me, but the biggest benefit has been making my progress measurable, and not with a scale. It’s eye opening to realize how useless bench press and bicep curls are in the grand scheme of things. I was told I had to do both twice a week and was a little panicked when neither were programmed AT ALL during my first month. I laugh when I think I used to spend Friday night at the gym doing 40+ minutes on a treadmill. As Glassman would say “you get sweaty and you come home tired”, but that was about it. I actually am doing something that I think will allow me to live a better, healthier, longer life. Heck, I’m actually doing stuff I never thought imaginable! My goal for the end of this year is to squat 300#, a weight that would have been laughable 2 years prior. On top of putting purpose into my workouts, it has also changed other aspects of my life. Sometime around 2009, I injured my low back either running or lifting at the gym (and they say crossfit is dangerous). Since then I had

suffered from low back pain. So much that I feared long car rides and couldn’t sleep in on the weekends. It was one of my biggest fears when I started CrossFit, and since I rarely even think about it. Crossfit has changed the way I eat and the thought that goes into what I put in my body. Our refrigerator today looks nothing like it did 2 years ago. Probably the biggest and best change to my life has been being able to enjoy it with my wife, Megan. Other than a 10 week cycle of Farrells and a short stint at Kosama, going to the gym and working out had always been something I did alone. I never made friends at the gym and since college I didn’t even have a workout partner. Being able to share this common interest with her has made the experience so much better.

Favorite & least favorite movement – Favorite movement is the Snatch. Something exciting about diving under a weight that can crush you. Least favorite movement… I have 2. I HATE thrusters! Since I don’t really consider them a “movement” as much as a punishment, I have a second. The dreaded handstand pushups with my feet on a box. Not only because it’s about 4 scales below RX, but also because they make me wanna vomit.

Family info – My wife Megan, whom some of you know. Our English Mastiff son, Hank, who is completely unaware he is a dog and I don’t have the heart to tell him. And my gym family who is pretty great! 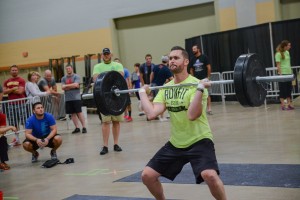 Something interesting about me – I’m not sure how interesting I am. I’ve never lived outside of Polk County. I was a volunteer firefighter for 6 years for the City of Johnston. I got married in Vegas! I accidently became a bartender (which thankfully led to meeting my wife!)

Favorite saying – “Muscles not ready!” It has more of an impact when a non-smiling Russian is saying it to you with a look of disappointment.

Favorite songs to workout to – Pretty much love the gangster rap. When Justin Vaught puts on his playlist, I know things are gonna get serious.

Favorite TV show or movie – Hands down Friends. I never watched it when it originally aired, but in my late 20’s I felt I could relate to every episode. Still cracks me up. And Sons of Anarchy… Because lets face it, who wouldn’t rather run guns and ride bikes instead of being an accountant?

What movement or skill were you most excited about when you were able to do it? – Bar muscle up was pretty cool but I still get excited when I have a breakthrough with the snatch. I signed up for the 2015 open, which was almost exactly 1 year after I started. The first workout included sets of 5 snatches at 115#, a weight that is easy for most 220# guys. After a humiliating 40+ attempts, I ended with only 8 successful snatches. A couple weeks ago I was doing 3 rep sets of power snatches at 125#. Hey Klokov! My muscles ready now?!