How did you hear about CF? A few years ago my brother was telling me about this 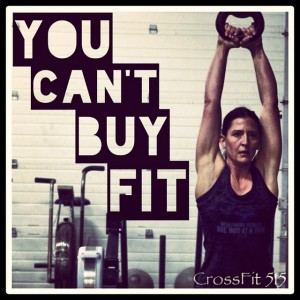 crazy sport called CrossFit where even women were doing workouts that could contain 100 pull-ups in addition to other intense movements. At that time I was very focused on training for triathlons, but that conversation stayed in the back of my mind. Fast-forwarding to the spring of 2013, I was trying to recover from being bedridden for about 30 days & hospitalized for a spontaneous cerebral spinal fluid leak. I was getting very frustrated with not being able to regain my strength on my own. The conversation I had had with my brother a few years earlier led me to research CrossFit gyms. I found CrossFit 515 on the Internet. I watched a few videos that were posted on the website, which intimidated me so much that I chickened out for a couple more months. My friend and neighbor, Chrissi, agreed to come try it with me. We decided to give the free trial period a chance and if we hated it, we figured we weren’t out anything. We were hooked within 2 weeks.

How has CF changed your life? The most obvious way that CF has changed my life is that I am feeling stronger than ever. Also, before CF I used to put a lot of energy into trying to get a scale say a certain number. Since starting CrossFit, I am not concerned with the number on the scale near as much as I am with the numbers on the whiteboard next to my name and with how I feel after a workout. Another way CF has changed my life is having the chance to meet and work out with amazing people who are inspiring because of their determination, focus, strength and refusal to make excuses.

Family info: I have been married to my husband, Dana, for over 13 years. He is 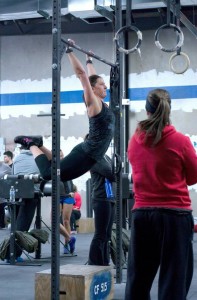 hilarious and makes me laugh to the point of tears almost every day. We have a 14-year-old son, Peyton, who loves wrestling. We also have a 9-year-old daughter, Justice, who loves soccer. We have two dogs, Clancy and Josie. We moved to Grimes about 2 years ago so that our kids could go to DC-G schools. We happen to live in one of the most fun neighborhoods in Grimes. . (Well, that’s my opinion anyway:)

Something interesting about me? I have a life-to-do list that I wrote in 2005. I add things to it as I find new things that I really want to experience. Some of the things I have crossed off in the past are compete in an Olympic-size triathlon, skydive, and take guitar lessons. So far this year I have crossed off go to Washington D.C. and see the Grand 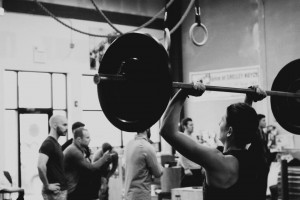 Canyon. My husband and I signed up for RAGBRAI this year, so hopefully I will also get to cross off ‘ride RAGBRAI from start to finish.’

Favorite saying? It’s actually a Bible verse: Philippians 4:13 “I can do all things through Christ who strengthens me.” It’s tattooed on my leg so I won’t forget it.

Favorite songs to WOD to? Roar by Katy Perry and Counting Stars by OneRepublic. I also like Eminem, but don’t tell my son that since I strongly discourage him from listening to Eminem.

Favorite TV show? I LOVE the show Parenthood. It’s about the only show I watch.
What movement or skill were you most excited about when you were able to do it? Pull-ups without a band for sure.

4 Responses to Athlete of the Month: Shelly Braunschweig