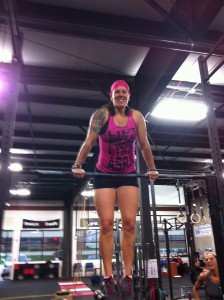 How did you hear about CrossFit?
I had a friend on Facebook and I would see him posting things about CrossFit that I thought looked awesome. I asked him if he had any recommendations about a CrossFit gym and he said CrossFit 515. That was in July 2011. In October of that year I went to Houston, TX to the UFC fan expo and there was a CrossFit competition at the expo that was one of the greatest things I had ever seen! I got to watch these athletes do things I didn’t know were possible and when I came home, I knew I had to give it a shot.

Favorite/least favorite movements or workouts?
My favorite movements are Power or Hang Cleans, Overhead Squats and Turkish Get-ups.
My favorite workouts are; “Grace”, “DT”, and I love strength days! I have developed a much better relationship with rope climbs & pull-ups/chest to bar pull-ups and look forward to these movements now.

How has CrossFit changed your life?
CrossFit has had a HUGE impact on my life over the past year. Like some I thought I was in fairly good shape when I started CrossFit. I have worked out for years and had even done functional training, but nothing had prepared me for what I would be doing or what I was actually capable of at CrossFit. My overall fitness has improved drastically from lifting heavy weights to moving weights & myself fast and acquiring skills like Double Unders and Snatch. I’ve had opportunities to travel and compete with and against athletes I look up to. More than that I have been around people on a daily basis that are doing things they never thought they could do and their effort is so inspiring. The principals of CrossFit have transferred over in to other areas of my life, I have maintained a 3.2 + GPA since going back to school (which is way higher than what I had gotten in the past). The idea of setting goals and working hard to meet them has motivated me more than ever since starting CrossFit. 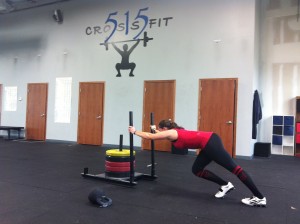 Job Info: I work as the Director of Girls Student Ministry at Point Of Grace Church.

Family Info: My parents are George and Becky, I have an older brother Todd and I am an identical twin to my sister, my biggest cheerleader, favorite training partner, and best friend Mindy.

Something Funny/Interesting about me: I love MMA, I enjoy training/ and used to compete in Brazilian Jiu-Jitsu/Submission wrestling. My favorite color is Red.

Favorite Saying: Oddly enough I don’t have a favorite saying, and I tend to balk at “motivational quotes”. (I hate for that to sound bad) I have heard Bobby Noyce say something though that definitely rings true…
“Anything’s better than nothing, nothing’s better than CrossFit.”
I like that one.

Most/least favorite song to WOD to?
I am equally thrilled with anything; Disturbed, Korn, Slipknot as I am with anything HOV, Kanye, and Lil Wayne.

This entry was posted in News. Bookmark the permalink.

14 Responses to Athlete of the Month: Michelle Clark